It doesn't take very long to recognize the value of Tradition in the Cogswell family. Their involvement within the fire sprinkler industry is well documented and well known within the New England sprinkler communities. The family Matriarch, Mary J. Cogswell, made her mark by becoming the first woman president of the Rockwood Sprinkler Company's Mutual Aid Association in February of 1949. That strong foundation continues today through her grandchildren, John, Jeffrey and Joni Cogswell. It was their father, John (Jack) Cogswell who followed his mother Mary through the doors at Rockwood Sprinkler in 1951 to establish the second generation of Cogswells in the sprinkler industry. As a junior design trainee, young Jack listened and learned from some of the masters and founders of the burgeoning international fire sprinkler industry.

After 30 years of dedication, it was at Rockwood that Jack realized the changing industry and the need for the installing contractor to change with it. With two of his young sons in tow, Jack decided it was time to apply his years of knowledge and Cogswell Sprinkler Company was born. The early eighties were not the best of economies but armed with a dream, Jack stayed focused on the target and as the expression goes, "The Rest is History".

A third-floor apartment on Edgeworth Street would serve as the corporate office for the young company. Jack performed the Sales and Design, John and Jeff, barely out of their teens, would install the pipe under their father's watchful eye. Despite the slow economy, Cogswell Sprinkler Co. grew into a formidable force in the Central Massachusetts region. Tragically and suddenly, Jack passed away in 1988 and in the strong Cogswell tradition, the young brothers, only 28 and 25 years old, had the daunting task of maintaining the business while dealing with the loss of their father and mentor. It was a very tall order for the two young men.

The business of maintaining Cogswell Sprinkler Company was soon overshadowed by the business of growing the young Company. John and Jeff, having learned well, set the mark high and let the arrow fly. Partners such as Commerce Bank stepped up early on in support of the young businessmen, another tradition that continues today, and "they're off and running".

The 3rd Floor on Edgeworth Street couldn't hold the upwardly mobile duo any longer, so in 1989 CSC relocated to what seemed comparatively luxurious to the new expanded space on Milton Street. Now joined by Sister Joni and childhood friends, Russell Simmarano and Scott Bernstein among others, the company had its new foundation based upon faith, trust and friendship.

In 1991, resulting from a decade of steady growth, Cogswell Sprinkler Company needed even more room and relocated to 22 Canterbury Street, where it still resides today. Recent internal office expansion necessitated the relocation of the fabrication shop across the street to the former W F Lynch Co. facility.

The tradition of tradition seems inevitable for the Cogswells. The future offers all the hope and dreams of the 3rd floor apartment on Edgeworth Street, just the numbers have changed. We are bigger, stronger and more secure than then, but our core beliefs remain the same. It is in that tradition that we continue to grow, one satisfied customer at a time just the way Jack wanted it.

The Rockwood Sprinkler Co. Worcester, MA in the early days 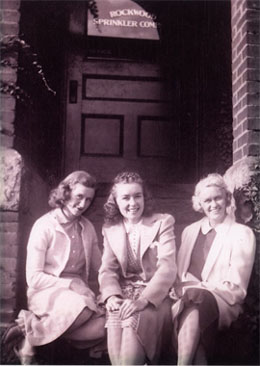 Mary J. Cogswell is pictured on the right. 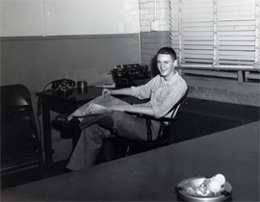 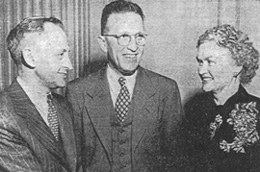 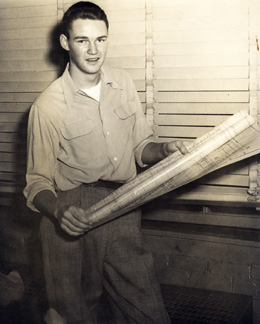